On the 19th to the 20th May the EIS hosted the peak of Boccia competition in England, the BE Cup finals. While most of England were keenly observing a royal wedding, the boccia athletes that had gained qualified through their regional competitions were battling it out for the BE Cup trophy, and  and the title of BE Cup Champion.

PACE Boccia were represented in three of the four classifications at the competition:

Alex Dukes (BC1) this was Alex’s 6th appearance in succession at the BE Cup Finals and he was aiming to be amongst the medals once again, after claiming the bronze medal in last year’s Finals

Reshad Saraj (BC2) who was our  favorite to win the BC2 title, after a succession of commanding performances in all competitions so far this season, most notably in the regionals where Reshad went unbeaten.

Jamie Keat (BC3) the youngest Boccia athlete at the BE Cup Finals, at just 13 years old. Jamie

qualified for this year’s competition by winning gold at the Heathcoat Cup Finals in February. 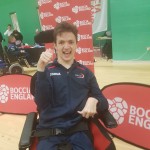 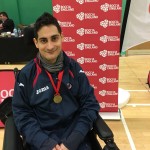 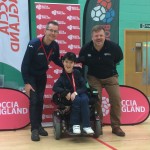 On the Saturday and Sunday morning the group matches were played with the knockout stages taking place on Sunday afternoon. In order to qualify from the groups into the knockout stages, athletes needed to finish in first or second place. Reshad and Jamie both had five group matches while Alex had three. In the BE Cup finals there are no easy games and you have to hit the ground running to build up your momentum over the competition.

Unfortunately, Alex and Jamie failed to advance to the knockout stages of the competition. Alex lost his first match to Daniel Wain 7-1. Straight from the off, Alex found himself under pressure after conceding 4 points in the first end. This was made possible by Daniel’s strong Jack and first ball combination. Alex was unable to beat Daniel’s effective lay-up or minimize the scoring opportunity for his opponent. With this early momentum gain, Alex had to score some big points on his Jack in the second end. Alex went short, right and threw a good first Jack ball which was blocking Daniel’s line to the Jack Ball. This unsettled Daniel, who was unable to get closer with his six balls, providing Alex an opportunity to get back into the match. Unfortunately, he was unable to capitalize on the situation, only scoring a point which wasn’t enough to put the pressure back onto the opponent. Daniel took the game out of reach in the last two ends, winning the match.

Alex had to win his last two group games to advance. His 2nd match was against Holly Goodwyn, whose strongest area of the court is at long range, a rarity in the BC1 classification. Alex came out the winner with a 6-2 victory, with the highlight of the match taking place in the second end, scoring 3 out of a possible 6 points.

This meant Alex had was still in contention for second place and qualification from his group, with Daniel Wain sitting in first place after beating Jabe Peak in a 5-0 upset. Both players needed to win to advance, and in a tight match, Jabe Peak secured 2nd place in a 4-0 win. The quality of Jabe’s Jack and first ball combination proved to be the deciding factor. Alex was unable to knock it off and as a result, was unable to register any points on the scoreboard. Alex finished 5th overall in the BC1 category, Jabe Peake and Daniel Wain ended up claiming the gold and silver medals respectively.

The BC3 category  was one of the most competitive, with 7 out of the 8 athletes having competed at International standard. Jamie was the only player in his group with no international experience, this was in addition to being the youngest Boccia athlete at the BE Cup Finals, aged just 13 years old but already making this third appearance at this level.  Jess Hunter and Rich Amos are two examples of how competitive the BC3 classification was this season, Jess has competed at England and GB level and Rich Amos currently represents England and won the National Championship in 2016.

Despite the odds stacked against him, Jamie had his best BE Cup finals to date in terms of performance and points gained. Highlights include, scoring 3 points in the first end against Cecilia Turk and nearly beating Lee Maddison in a tightly fought match, that finished 6-5 after Lee took three points on the final end. These performances indicate Jamie is continuing to improve year on year, and although Jamie didn’t advance out of the group, the experience gained by playing against the top BC3 players in the country will prove to be valuable in the years ahead.

2018 is shaping up to be a year to remember for Reshad who continues to show why he is one of the top athletes in the country. Reshad was the second seeded player to win the competition. He started off by winning four out of five group matches. Including a 9-0 win against Jasper MacCall and a 6-1 victory over James Clowes. The match Reshad lost was against a debutant to the BE Cup Finals, Peter Langton, who Reshad has not played before. Nonetheless, it was a close match, finishing 4-3. In previous years, this loss could’ve impacted Reshad’s performances negatively and shifted the competition momentum against him. However, he showed a maturity and calmness to put that loss behind him and move forwards to win his remaining matches.

Advancing to the semi-finals in first place, Reshad faced William Hipwell, who finished 2nd in his group and was the number one seeded player in the competition. These two fantastic BC2 players have faced each other many times with the last time being in March at the BE Cup Playoffs. Reshad came out on top. This time, it was no different and Reshad was able to get through an intense and grueling semi-final fixture, winning 4-2.

5 wins out of six was enough to see Reshad complete his journey to the finals of the competition, where he faced Tim Hayes, in a repeat of the UK Championships Final in 2017. In the UK Championship 2017 final, Tim Hayes came out victorious over Reshad, a fact which was surely going through players’ minds whilst they made their mental preparations in the call up room before the match. However, Reshad knew that if he could get past Tim’s strong layup play with strong, accurate knock offs, he  would be in a strong position to win the match. This is exactly what happened and Reshad executed the majority of his shots with great success, winning  5-1, and the BC2 title for a second time in three years. 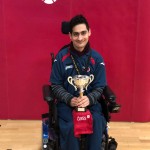 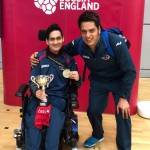 Reshad and Sunil are both delighted! 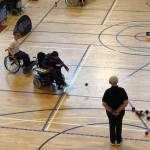 Reshad maximises his score in the semi

After receiving his trophy and gold medal Reshad kindly gave a short interview to us. This is what he had to say…

Q. How are you feeling after winning the BE Cup for the second time?

I felt proud of myself for how I overcame each match. In both positive and negative situations, I still delivered when I needed too

Q. What was going through your mind during the final?

In the final I didn’t want to make rash decisions so I took a little longer to think about the right thing to do. I didn’t want to risk anything or do something silly to make the game tighter than it could have been

Q. What does the future hold for the remaining season?

“The future holds so many possibilities; I have the GB Championships coming up soon. I want to continue to improve getting the right support is key to this. It’s been a fantastic season so far, I’m playing the best boccia of my career. The focus now is on the GB Championships and preparing for that”.

Q. Is there anything you would like to say?

I Just wanted to thank Sunil Birdy for being my coach at the Finals. I also want to give a massive thank you to everyone at University of Hertfordshire that deals with TASS, a special thank you too Hannah Darling, Sion Thomas, Ryan Lateward, Fiona Scott and many more. Thank you very much for organising, developing programmes and one to one sessions.

I wouldn’t be here if it wasn’t’t for PACE, they make me feel so welcome and it is a place where I can be myself. The people I have met and the opportunities I have been afforded by being a part of this amazing club, I can’t put into words

Lastly, how can I not forget my Mum, Step Dad and Aisha, so much to say but thank you for everything you have done for me.”

Reshad played a carefully considered strategic match and cemented an early lead by winning 3 of the 4 Ends. It was a joy to watch

Sahar, Reshad’s mother,, who spoke after the match said..

We are very proud of Reshad’s achievement this weekend, he has worked so hard to get to where he is today and we’d also like to thank Sunil and Aisha for such strong support this weekend. It’s been a great team effort and we’re now looking forward to the GB Championship in Scotland next month.”

No Response to “BE Cup Finals Review – PACE take BC2 gold!”