Mitchell and Aiden Robinson were presented and awarded with their Teams and Pairs bronze medals they won back in December 2019. The Robinson brothers were training hard at the Hawks Academy at Hatfield in preparation for key competitions: the BE and Heathcoat Cup. Hawks Academy Head, Dan Bentley presented the medals to the pair and commended their brilliant performance at the competition.

The Teams and Pairs competition is in it’s third year, taking place in the middle of December in Sheffield.

The event consisted of four games: two of which were against Scotland’s National athletes who fielded three separate teams. Mitchell and Aiden weren’t phased by the daunting prospect of facing National Athletes. In fact, the pair produced a fantastic performance against the Scotland C team, beating them 13-0, to secure the bronze medal. The pair followed this by beating the Gladiators Academy 6-1, segmenting their 3rd place position.

This medal topped of another good season for Mitchell and Aiden. The medal is testament to their ability and chemistry to work and support each other.

Congratulations to both Aiden and Mitchell on their bronze medal. 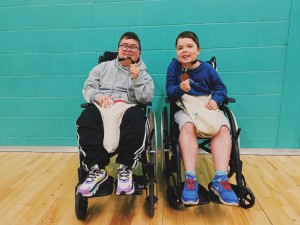