The Hatfield BE Cup Regionals and Heathcoat Cup competitions took place on the 8th and 9th of February at Hertfordshire University in Hatfield. A grand total of 5 PACE Boccia athletes competed across both events – and proving to be one of the most successful weekends in PACE Boccia’s history

Mitchell entered the BE cup in good form after his performance in Sheffield, earning 5 points towards his qualification to the BE cup finals – all he needed was 2 more points to qualify. However, Mitchell’s ambitions went far beyond qualification points, he was aiming to finish in the medals by the end of the day.

Mitchell not only met his target, but absolutely obliterated them going undefeated throughout the day, playing a total of 5 highly competitive Boccia matches. As evidenced by the results, Mitchell dominated every match he played and fully deserved his first ever BE Cup Regional Gold Medal.

Competitions for the Heathcoat Cup took place the next day. These competitions allow opportunities for up and coming Boccia athletes and veteran ones, to enter for a chance to qualify for the BE Cup finals. Jamie Keat firmly fits into the second sanario with six years of experience under his belt. Jamie is a player who over the last couple of seasons found it difficult to combat the competitive nature of the BE Cup, so this season decided to enter the Heathcoat Cup in the hope to rediscover his form. This proved to be a wise decision as Jamie finished first in the BC3 category, Congratulations to Jamie.

Aiden, not to be outshined by his brother, Mitchell, also competed in the Heathcoat Cup in the BC6 Category. Spurred on by his brother’s success on the previous day, Aidan was determined to match him. And that he did, going undefeated in the 5 matches he played. A brilliant feat considering  Aiden was unexpectedly re-classified to a BC6 just two days before the start of his Heathcoat Cup campaign, resulting in him facing completely new and different opponents which meant reassessing his game strategies. 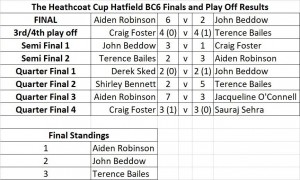