Since the Covid-19 pandemic started more than a year ago, very few people would have thought that more than a year later we’d be just be taking the first few steps towards normality. Unfortunately, one of the biggest sufferers, as a result, was the job market, where thousands of jobs were lost on an almost daily basis.

On the 8th of April session of PACE Pals, the topic of discussion was disability in the workplace, and Jaspaul, one of our serving members at PACE, spoke about his personal experiences.

Let’s start from the beginning, when did you take your first steps into the world of work?

It was at school as part of work experience when I was about 14 years old. It was a two-week placement working for a disability magazine called Disability Times. I was tasked with coming up with news stories and content for the magazine – a pretty big responsibility for my first job, if I do say so myself. I loved it though.

Did the work experience influence what you wanted to do when you were older?

Oh definitely! I’m a people person and like interacting with people, and the work experience helped me realise this. A few years later I joined PACE – and over the years I climbed the ranks, for the lack of a better word, from member to Team Leader – where I took part in many Hanwell Carnivals, raising money for PACE. The confidence I gained was hugely important to the different jobs I would get in the future. 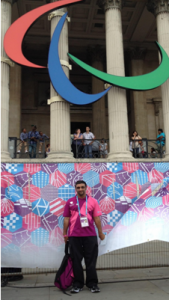 That’s great to hear! Now, moving on slightly to the present, obviously the pandemic has had a huge impact on the jobs market. How has it been for you?

Like for many people across the country, it has been challenging to adjust to working from home. I’m currently work for another charity and they have been really helpful and understanding to the transition.

Do you think that working from home could be a positive for people with disabilities?

I could definitely see that. It’s of course easier to just get out of bed, get dressed, have breakfast, and then just whip out the laptop and hop on a Zoom meeting, then, for example, going on public transport, hoping that the designated disabled space is free. Or that the lift to the train station isn’t out of order, basically locking you out. Basic things that many people take for granted that unfortunately disabled people can’t – working from home could alleviate these worries.

From the tone of your answer, Jaspaul, I get the impression that working from home isn’t for you… Am I right?

Ha-ha…how did you guess? Yeah, like I said earlier in the interview I’m a people-person who likes to speak to people face-to-face, which is something you just can’t replicate on Zoom. But working from home did threw up some inconveniences that people might not be aware of. For example, I have specialist equipment that helps me with my work that I received through a government scheme called Access to work. I use a speech recognition software program called Dragon Dictate because I find it hard to type. However, using this in conjunction with being on a video call is incredibly difficult. I could mute the call to dictate to Dragon, but of course I might miss vital information or I can’t contribute as much as I would like due to speaking to Dragon. It’s just really frustrating.

What would you say to companies that are looking to hire disabled people?

For me, it’s as much about the little things as well as the big picture. Last month I was offered a job as a steward at Wembley Stadium – checking tickets, looking after the public, that sort of thing – and with the Euros coming up I was incredibly excited. However, I was forced to decline the opportunity in the end due to fact they were only offering 20 minutes break. This is too little time for me as I get tired from being on my feet more quickly than others might. It’s the little things that count.

There was also the fact that I had to wear a uniform. Now, I know what you must be thinking, wearing a uniform? That’s not a big deal, lots of people have to. However, the uniform they wanted me to wear had buttons, and remember I use speech software to type so imagine me trying to tie or undo a button. It’s a lost cause if I ever saw one. Combine that with a possibility of an evening kick-off where the match usually finishes around 10pm, plus you got to wait until thousands of fans leave. I wouldn’t be home until around midnight at the earliest. So, I would need to arrange carers to come at midnight help me to undo my buttons on my uniform – it’s just not feasible unless I had 24-hour care, which I wouldn’t get and frankly don’t need. The only course of action I had was to turn the job down. That’s what I mean about the little things mattering as much as longer breaks or accessible equipment. I of course told the people at Wembley all of this so hopefully they take the feedback on board. Raising awareness is the key for more disabled people to get into work, which I’m 100% behind.

Jaspaul and his mum meeting and accepting and award from then Mayor of London, Boris Johnson for exceptional volunteering services in the London area

No Response to “Jaspaul’s Work Experiences”